Not Dogs are Celebrating All-Things Vegan this November

The first of November is World Vegan Day… and for the whole month we’re celebrating
Vegan Month!

In November 1944 a group of friends wanted to distinguish the difference between not eating meat versus not eating any products from animals and so the Vegan Society which Not Dogs is part of, formed. Every November year since 1994, the Vegan Society have been celebrating World Vegan Day and, because of its popularity, it’s grown to become World Vegan Month where vegans and veganism is celebrated all over the world! 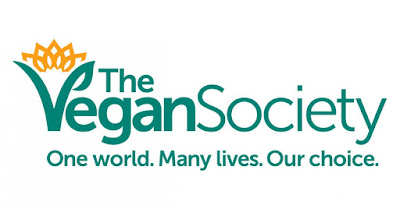 The first ever Vegan Society records show there was just 25 members now there’s over 7,000! The demand for meat-free food increased by a whopping 987% in 2017 and the number of vegans in the UK quadrupled between 2014 and 2018! It’s not only health that’s benefitting from this change; plant-based diet cuts the use of land by 76% and halves greenhouse gases and other pollution caused by food production.

This month is a time to recognise how far the vegan movement has come and to highlight how beneficial, easy and accessible (especially now Not Dogs has arrived!) can be. It’s not just for vegans, but everyone can get involved whether it’s simply for World Vegan Day or the whole month with the 30 Day Vegan Pledge - every little bit helps health, animals and the planet.

We’re really excited about a new app called VeGuide that the society has developed which launches on the 1st of November. There’s an easy 30 day programme to follow and regular encouraging boosts tailored to your motivation.

In-store to celebrate World Vegan Day we’re giving you 20% off all vegan Not Dogs! Our utterly delicious seiten-based Not Dogs topped with all-vegan toppings (on request) are a big hit with our customers so, if you usually stick-to our original Not Dogs (we love them as much as you do!) why not try our lightly smoked vegan option and make use of November's special offers!? 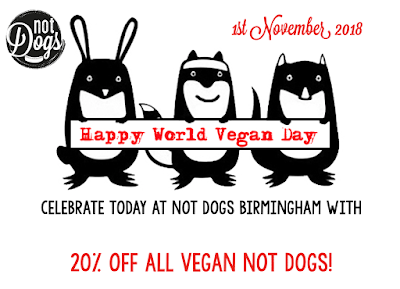 Every Friday in November at Not Dogs Birmingham, to mark World Vegan Month, you can get 20% off our favourite vegan menu items…

Happy World Vegan Month! See you for some delicious goodies this November!

Email ThisBlogThis!Share to TwitterShare to FacebookShare to Pinterest
Labels: Not Dogs Birmingham